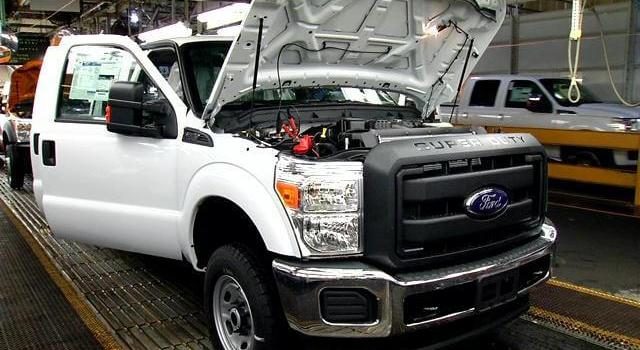 Ford Motor Co. intends to boost the size of its stamping facility, body shop and materials handling at the Kentucky Truck Plant.

In plans filed with Metro Louisville zoning officials, the company is seeking approval to add a total of 288,715 square feet at a handful of locations on its 413-acre site at 3001 Chamberlain Lane.

Ford officials, asked for comment about the expansion, said only that “we cannot discuss future manufacturing or product plans.”

Todd Dunn, UAW Local 862’s president, said that “we’re continuously trying to improve upon our footprint. We seem to be selling every truck we can make, so it’s a good problem to have.”

What’s coming to Chamberlain Lane has been no secret. The automaker confirmed a year ago that after it completes the conversion of its F-150 light duty pickup truck to an aluminum frame and bed, the Super Duty is next. The company previously sank $80 million for retooling, expanding parts storage and generally upgrading the facility.

Executives have been mum on how much of an investment the conversion that will require at KTP, where the F-250, 250, 450 and 550 Super Duty models are manufactured — as well as Expedition and Lincoln Navigator. Officials have said they want to produce lighter trucks to boost fuel economy and increase the towing capacity, which is key to truck buyers who haul horse trailers, fifth-wheel recreational vehicles and other trailers.

In July, the company began taking 5,000 applications at the main state employment office in downtown Louisville to add assembly technicians that could earn starting wages of nearly $16 an hour. They didn’t say how many people they intended to hire, but UAW leaders indicated an additional crew was in the works.